Archive for the ‘Urban Chill’ Category 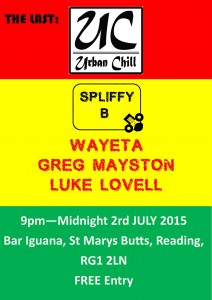 After 4 years of monthly events, Urban Chill has decided to hold their last event at Bar Iguana.

For the 2nd Urban Chill of 2015 we will as always have some brilliant musicians. Watch this space for announcements 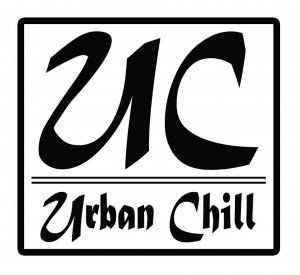 DJ Spliffy B started DJing at squat parties in 2000 around Dorset and Hampshire, such as Hursley Fields. He then started playing in clubs in 2002. Between 2002 and 2008 Spliffy was playing in various places mainly in squat parties around UK. In that time he did play a few sets in Germany, and Belgium.

In 2004 Spliffy B amongst other events he was promoting he promoted DNA with DJ Slimz. DNA was a hard house and drum n bass event based in the Firestation in Dorchester, Dorset.

Between 2008 and 2011 due to personal reasons he only played a few sets, one of which was on Weymouth Beach.

In 2011 he played a set in Netherlands. Since then Spliffy B has started promoting and DJing again. Spliffy B is currently a resident of:

He has also been ‘Special guest’ at the highly regarded Smash Techno (November 2013), Club 414, Brixton. and has recently played in Homegrown, in Bar Iguana

He promoted and played at Liquid Filth at Bar Iguana, Reading with:

Spliffy B has supported several International DJs, most recently:

and highly regarded DJs on the UK underground scene like:

Spliffy B also was actively playing at the open Decks night at Bar Iguana where they had such names as:

Spliffy B has played many clubs around Reading and these include:

Spliffy B Plays many genres including:

Whilst Still in Full-Time Education Wayeta B Pilgrim Became a Member of the Angelic Voice Choir. Back in the Day, when the Choir appeared on ‘People Get Ready’ with the Williams Brothers.

Following her success as a Group and Choir Member in London, Ipswich and Cambridge, Wayeta Began to sing Solo in 1999.

Wayeta held a residency at:

She has also appeared at:

★ Awarded Best Gospel Act-Singers Paradise- Urban Voice 2001 Awards
★ Host of ‘THE GOSPEL JAM’ Radio show ICR FM 1999-2001
★ Sang ‘Amazing Grace’ with LCGC on the Choirs Ipswich leg of their 2001.
★Wayeta appeared as a session musician on the Album ‘Fil the Soul’ by Fil Straughan
★Singing at a Special meeting held in Reading in honour of Jesse Jackson
★Wayeta is a Singer Songwriter and has recorded vocals for various Gospel, House, Garage and Soul Projects.

★★★LUKE RUFFLER★★★
( https://www.facebook.com/lukerufflermusic )
An up and coming acoustic solo artist from Reading, always ready to play anywhere and anytime

Twitter: @EmilarChar_H
Acoustic Pop | London
Biography
‘Get ready to remember the name Emily Charlotte Haynes. Her fantastic voice and wonderfully and lovingly crafted original songs sparkled next to terrific renditions of modern classics. Her voice with a certain amount of individuality which puts her performance many acoustic miles between her and other lady-folk-singer-songwriters that seem to bother the charts these days. Her obvious indie/folk in… See More
Artists We Also Like
The xx, Metronomy, Slow Club, Rue Royale, Little Fish, Ben Howard, City and Colour.

At the next Urban Chill they will have the legendary sounds of Motown, Stax and also Blues music will be thrown in for good measure.

Catch the Readings local legendary singer Wayeta as she performs Motown songs live. You can as always garentee soulful vibes 😉

As always Resident DJ Spliffy B will be playing a mix of Stax, Motown & blues.

Spliffy B will be playing an eclectic mix of music inbetween live musicians at Readings premier live event.

Yes you have read correctly. Urban Chill is back! And its back monthly! 1st Wednesday of EVERY month in the newly opened Bar Iguana. If you have not been to Urban Chill before it is mostly a live acoustic event, sometimes we do wander from that slightly 🙂